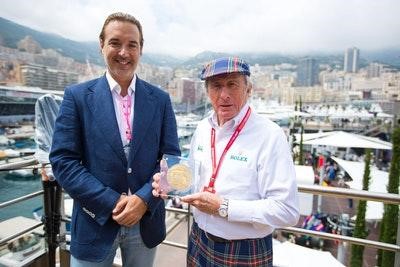 The event, held in Monaco to coincide with the Monaco Grand Prix weekend, featured a one-kilogram gold coin from Rosland, minted with Sir Jackie’s racing-era likeness and signature on the front and the classic Ian Rank-Broadley portrait of Queen Elizabeth II on the obverse side.

Only two of these coins will ever be minted. The first was auctioned in Monaco to benefit Race Against Dementia’s mission of finding better treatments, and an eventual cure, for dementia, which afflicts nearly 47 million people around the world today. The remaining coin, the last of its kind and a truly unique collectible, can be seen on Rosland’s website. It includes commemorative packaging, a certificate of authenticity signed by Sir Jackie Stewart, statements of fineness, weight, and proof, and a signature of the authorized Swiss assayer.

Rosland’s donated coin was won at auction by former Formula 1 driver Eddie Irvine, with all proceeds going to Race Against Dementia. All told, the Monaco event raised nearly $400,000 for the battle against dementia.

Appearing at the event alongside Sir Jackie, Marin Aleksov said:

“We’re passionate about supporting innovative charities and very excited to collaborate with Sir Jackie Stewart and Race Against Dementia to raise funds for a worthy cause. Sir Jackie Stewart is an icon of motorsport, with a lifetime of achievements; he has effectively used his profile away from the circuit to raise awareness for dementia research. There’s no better way to honour him than in gold, and no better place to auction this unique piece than in Monaco, the crown jewel of the Formula 1 World Championship. I would also like to thank Formula 1 for their support in this charity contribution; it’s fantastic when partners come together to support causes that are important to the Formula 1 community.”

Check out Race Against Dementia’s recap of the event, which includes a number of pictures of the auctioned coin, as well as photos of Marin Aleksov and Sir Jackie Stewart: