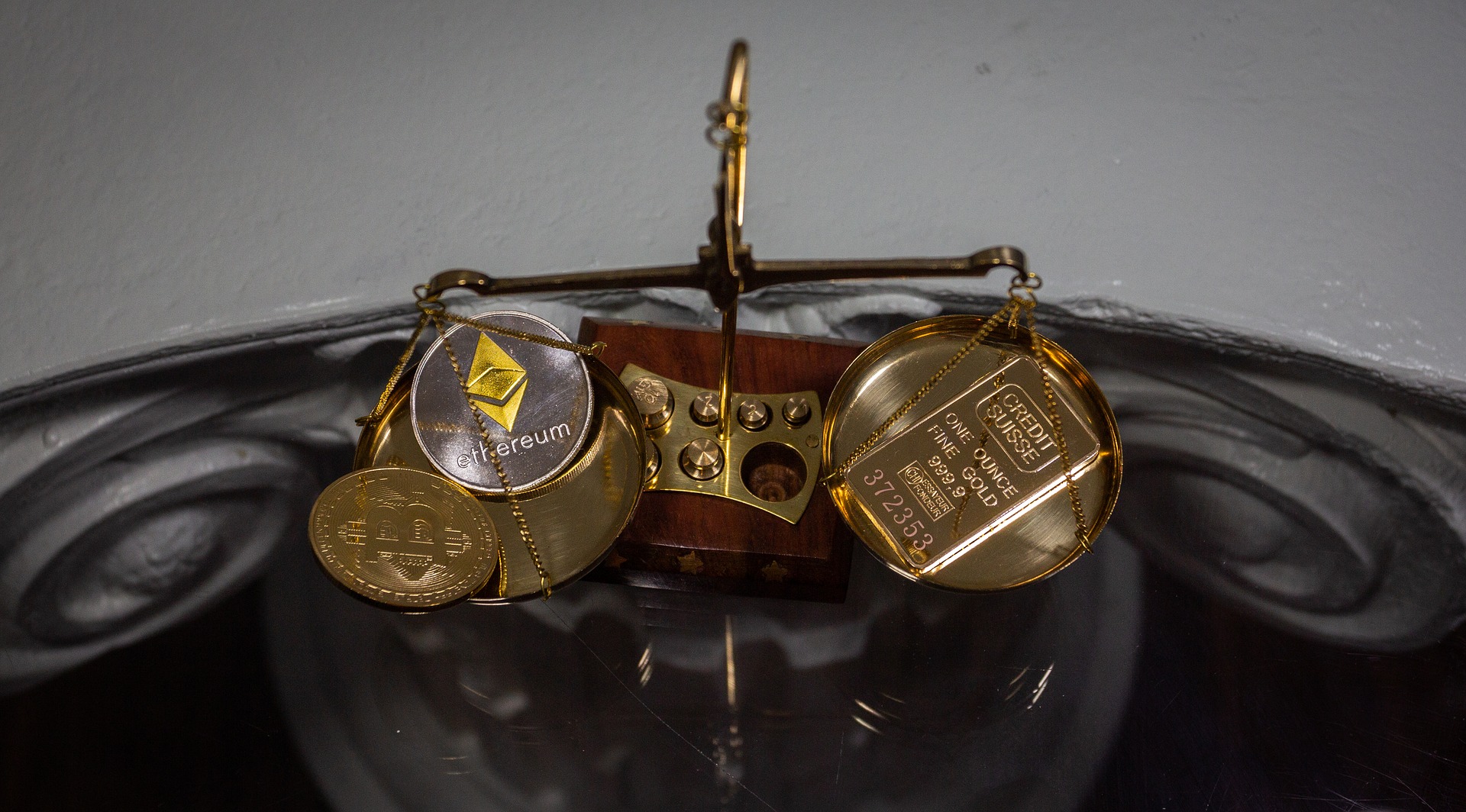 It’s time to talk about gold vs. Bitcoin. The rising popularity of Bitcoin and other cryptocurrencies has many people pitting gold and Bitcoin against each other. A host of unfamiliar terms come along when discussing Bitcoin. New terms such as blockchain, cryptocurrency, and NFTs often keep people from fairly considering the merits and challenges of these two asset classes. Understanding how it all works can be challenging and make Bitcoin and NFTs appear mysterious or not worth the trouble to learn about.

However, with Bitcoin often called the “new gold” or digital gold by crypto enthusiasts, it’s worth the time to learn about why this debate about gold vs. Bitcoin is so hot lately. Gold and Bitcoin are often presented in contrast, as opponents or opposites, with one often declared the winner. But is that really the case, and is it fair to gold, Bitcoin, or people seeking to diversify their assets?

To state it simply, Bitcoin is a digital currency circulated and managed using decentralized peer-to-peer technology called a blockchain, or distributed ledger, meant to increase transparency and security of financial transactions.

The concept of a decentralized currency means that central banks, financial institutions, and governments do not carry out, own, or control transactions. Instead, the network of peers distributed across the globe manages these transactions and issues bitcoins.

Created in 2009 by a pseudonymous person or group called Satoshi Nakamoto, Bitcoin is the most well-known cryptocurrency, and by far the most highly valued.

Blockchain is the digital collection of recorded transactions often called a distributed ledger because the records are publicly available and exist in multiple locations across the peer-to-peer network. Each “block” in the chain is nearly unchangeable, making it difficult to retroactively alter without the consent of every peer in the network.

Any changes to the blockchain require the creation of a new block, which is done using cryptography. Peers, or nodes, in the network provide computing power to solve incredibly complex equations used to build and complete each block or record in the ledger. Bitcoin miners are rewarded for supplying the computing power to the blockchain, earning bitcoins in a digital wallet for each completed block in the chain.

Blockchain technology was developed as the operating structure for Bitcoin. However, blockchain has been adapted to create different cryptocurrencies such as Ethereum, Litecoin, and others.

Where do NFTs fit into the world of cryptocurrency?

An NFT, or Non-Fungible Token, is a one-of-a-kind digital asset or non-interchangeable unit of data stored on a blockchain, used to represent physical objects such as art or real estate as well as digital items including songs, videos, and images.

The NFT represents the owned object, links ownership digitally in a blockchain to an individual and allows ownership to be sold and traded, with each transaction recorded in the blockchain. Most NFTs exist on the Ethereum blockchain.

As markets for NFTs and cryptocurrencies heat up alongside inflation concerns, some call Bitcoin the new gold. But what does that mean?

Why do people buy gold?

Gold is a precious metal valued across cultures and societies since ancient times. For thousands of years, people agreed upon gold as a physical store of wealth that maintains value across social, cultural, and national boundaries. The gold standard determined the value of a nation’s government-issued currency by how much gold the government had. Gold served as the foundation for the national currency.

Many countries have disconnected currencies from the classic gold standard, making the nation’s paper money and coins a fiat currency. But gold still retains value and remains a popular hedge against market volatility and inflation. This makes owning physical gold (and other precious metals) a popular way to help protect the value of wealth and assets in comparison to the relative volatility of the stock market or in the face of possibly spiking inflation.

Although gold is not necessarily expected to increase the value of assets or deliver growth like stocks sometimes can, the charm of gold for many people is that by comparison, its value can be more stable than securities like stocks and bonds.

What does it mean when people say that Bitcoin is the new gold? How do gold and Bitcoin compare?

How is it possible that gold and Bitcoin can be compared or even thought to compete? After all, gold is a physical precious metal mined from the earth, refined, and formed into ingots, bars, coins, and rounds.

Bitcoin is a digital form of currency that technically exists only as computer code, as digital information. Get rid of the servers and Bitcoin (along with every other cryptocurrency) disappears. Melt down all the gold bars and coins and the gold is still there, albeit in a different form. However, the likelihood of every computer disappearing seems about as likely as making gold cease to exist.

In some people’s eyes, there are parallels between gold and Bitcoin, in particular. For example, gold is available on Earth in limited quantities, while Bitcoin supplies are also finite. Beyond that gold, unlike paper money, cannot be printed by a government, and Bitcoin is not something a government can issue more of, to cover its needs.

Now let’s take a look at some of the main differences between gold and Bitcoin.

Comparing and contrasting gold and Bitcoin shows some important distinctions to keep in mind when considering which may make sense for you.

Although Bitcoin value is not pinned to a physical object, digital assets such as NFTs are linked to real-world objects as sources of value much like gold serves as a source of value.

How do I choose between gold and Bitcoin?

If you buy gold, it doesn’t mean you can’t buy Bitcoin, and vice versa. This debate is likely to remain a lively one as long as markets remain volatile and one camp sees the other as capturing capital and market value that they assume would otherwise be going into either gold or Bitcoin.

Regardless, be sure to do thorough research into gold and Bitcoin before making any decisions. People choose different options for different reasons. When buying Bitcoin or gold, be sure to include researching spot prices and check out these tips for buying gold, especially if the coins are purchased as a means to protect wealth. Make sure you understand the different ways you can buy gold, some of which include gold coins, bars, and gold IRAs.

It remains important for each person to understand what each asset does and how it may fit into their financial strategy.Get more information about why you might buy gold.