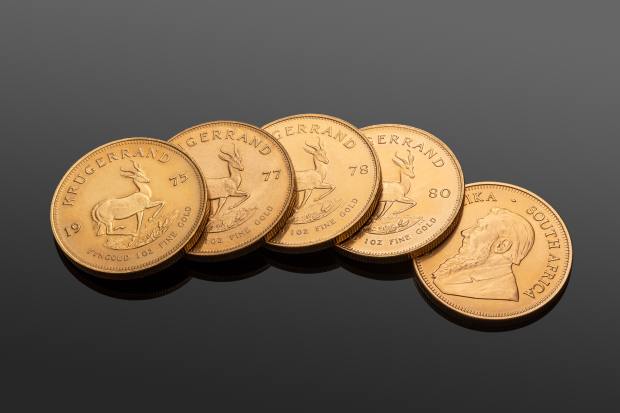 You’ve probably heard of a gold Krugerrand. But what is it? The Krugerrand is a 22-karat gold coin composed of 91.67% gold and 8.33% copper, produced by the South African Mint and Rand Refinery.

Krugerrand gold coins are popular among numismatists interested in collecting coins for their historical and aesthetic value. They are also a favorite among gold stackers primarily interested in the value of the coin’s physical gold content.

Popularity has fluctuated since South Africa minted the coin in 1967, seeing a downturn during the 1980s and 90s until apartheid ended in 1994. The gold Krugerrand and its silver and platinum variations remain as popular as ever. Coin collectors and people who prefer to safeguard their wealth through buying gold and other precious metals still share enthusiasm for Krugerrands of all kinds.

However, it is important to note that the gold Krugerrand is not a gold IRA-eligible bullion coin. We’ll discuss why a little later. But, for diligent coin collectors and precious metals stackers, it’s important to understand the history of this special South African gold coin.

A Brief History of the South African Gold Krugerrand Coin

The original Krugerrand was minted according to the following specifications:

Why Did the South African Mint Make the Gold Krugerrand?

Minting the Krugerrand achieved a few major goals by:

This strategy worked brilliantly. The South African gold Krugerrand had captured 90% of the gold bullion coin market worldwide by 1980.

However, the world grew more aware of South Africa’s apartheid government policy of segregation, and by the mid-1980s many western countries had imposed economic sanctions on the birthplace of the Krugerrand.

In 1985, the United States, which had been the largest market for the gold Krugerrand at its peak popularity, outlawed the purchase and importation of the popular gold coin. As the South African government began to dismantle its apartheid laws and practices, sanctions eased. In 1994, the US ended the ban on importing Krugerrand coins. Although the market for Krugerrand coins took a substantial hit from the economic sanctions, the coin remains popular today in its many forms. In 2017, the South African Mint marked the 50-year anniversary of its most famous gold coin.

Why Is This Gold Coin So Popular?

Despite political setbacks, the South African Krugerrand remains popular with coin collectors and bullion seekers alike. Many coins are valued as either numismatic coins or bullion coins.

Numismatic coins derive their value from their history, scarcity, condition as a graded coin according to the Sheldon coin grading scale, and demand on the coin market. Examples of numismatic coins include Mercury dimes, circulation coins with minting errors, and uncirculated proof coins that remain in pristine “mint” condition.

A bullion coin, on the other hand, derives its value primarily from its precious metal content. This means that the bullion coin’s value changes based on the current market value of the precious metal from which it is minted, such as gold, silver, platinum, or palladium.

South African Krugerrands can be valued both ways — as a numismatic coin or as a bullion coin. The design of the coin enables this dual valuation. Each Krugerrand includes the mint year, but does not have a face value, somewhat unusual for coins minted and considered government-backed legal tender. The absence of a face value led to gold prices determining the value of the coin. Beginning in 1989, the South African government officially declared the gold Krugerrand legal tender. That’s no problem in a stable gold market, but you can imagine the difficulty if the purchasing power of your currency fluctuates several rands or dollars from one day to the next. However, the appeal to coin collectors and bullion buyers remains strong. It’s no surprise that this coin has earned such widespread popularity by appealing to related yet different coin markets.

Krugerrand coins minted from silver and platinum arrived in 2017, the fiftieth anniversary of the original gold version. The SA Mint struck the silver Krugerrand from .999 fine silver and the platinum Krugerrand using .999 fine platinum. While Krugerrand coins are popular, it’s important to understand that they are not eligible for gold IRAs and other precious metals IRAs, according to IRS rules. Whether you’re thinking of buying Krugerrands as numismatic coins or as gold, silver, or platinum bullion, make sure you know why you’re buying and what that may mean for you before laying down your hard-earned money.

Bullion Coins Inspired by the Krugerrand

As happens when most products gain popularity, they inspire other similar versions, imitations, and alternatives.

In this case, the 1967 gold Krugerrand inspired some of the most popular precious metals mints to create special gold bullion coins:

How Much Is a Gold Krugerrand Worth?

Maybe you bought or inherited a gold Krugerrand coin and you’re wondering how much it’s worth. It’s important to understand that the value of a Krugerrand can vary greatly depending on weight, gold spot price, and whether you want to determine its numismatic value or the value of its gold content.

As I will always do, I encourage you to conduct thorough research before making any decisions to buy gold or any other precious metals, in any form. Different people choose different options for different reasons. To get you started, make sure you’re aware of how to research spot prices. Also, check out these basic tips for buying gold.

Find out more about gold Krugerrands and other gold coins available from Rosland Capital.

What Is a Gold Krugerrand?

One thought on “What Is a Gold Krugerrand?”