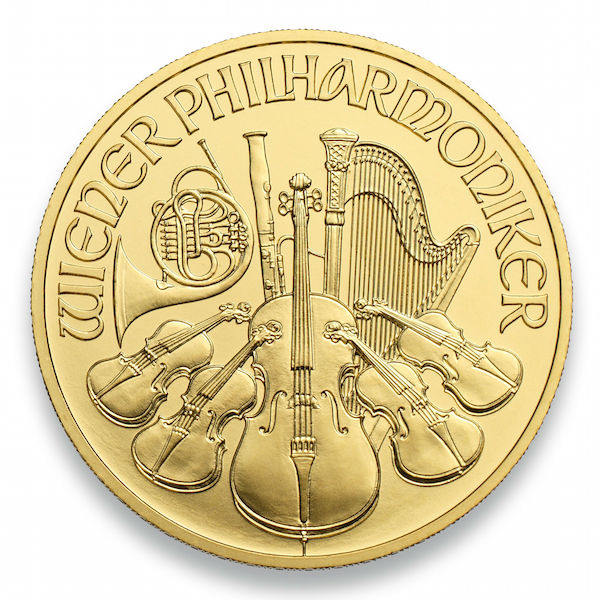 First minted in 1989, the Austrian Philharmonic gold coin was initially created in just two sizes, a one troy ounce version and a quarter ounce, each minted in 99.99% pure gold. When first introduced, the Philharmonic was valued at 2,000 Austrian schillings, later changed to one hundred euros in 2002. Popular among bullion coins, the Philharmonic was declared the world’s best-selling gold coin by the World Gold Council in 1992, 1995, and 1996.

Since it’s first minting, the Philharmonic has retained its distinctive imagery depicting instruments from the famous orchestra. The reverse features four violins, a harp, a bassoon, and a Vienna horn, while the obverse is filled with the pipe organ from Vienna’s concert hall.

Additional sizes of the coin were produced beginning in 1991 with the introduction of a one tenth coin; a one half ounce coin followed in 1994. Several other unique sizes have been created since, including a commemorative 15th anniversary version of the coin in one thousand ounces, of which only fifteen were minted. A 20th anniversary coin was minted at 20 ounces, also in a limited production run. Finally, a 25th anniversary version at just 1/25 of an ounce was introduced in 2014. In 2008, the Austrian Mint began production of a silver version of the coin.

Get more information about the Austrian Philharmonic gold coin and other bullion coins in both gold, silver, and platinum from Rosland Capital. Many of these coins are also eligible for inclusion in Rosland Capital precious metals-backed IRAs.