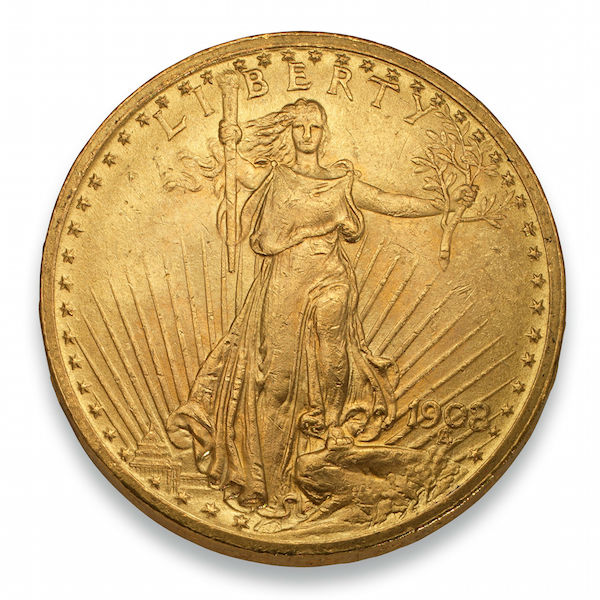 One of the most desired coins in collector circles, the $20 Saint-Gaudens coin is named for designer Augustus Saint-Gaudens. While the design was completed in 1907, Saint-Gaudens was unable to see the coin minted, dying the same year. The final design features Lady Liberty on the obverse face, walking forward while embracing both a torch and olive branch. The Capitol is represented in the background on the left, with rays of sun shining up across the coin. The outside is ringed by forty-eight stars representing the forty-eight states in the U.S. at the time. The reverse showcases an eagle in flight and includes the phrase “In God We Trust”. While President Roosevelt had originally asked for the coin not to include the motto, public outcry moved Congress to force its inclusion on the coin.

The 1922 Saint-Gaudens double eagle was minted in both Philadelphia and San Francisco. Today, coin quality is rated by a professional grading service with each coin receiving a score on the Sheldon scale. Measuring quality of strike, visual appeal, luster, and other key aspects, the coin can receive up to 70 points on the scale. After being graded, the coin is sealed in a transparent slab for preservation and eventual sale.