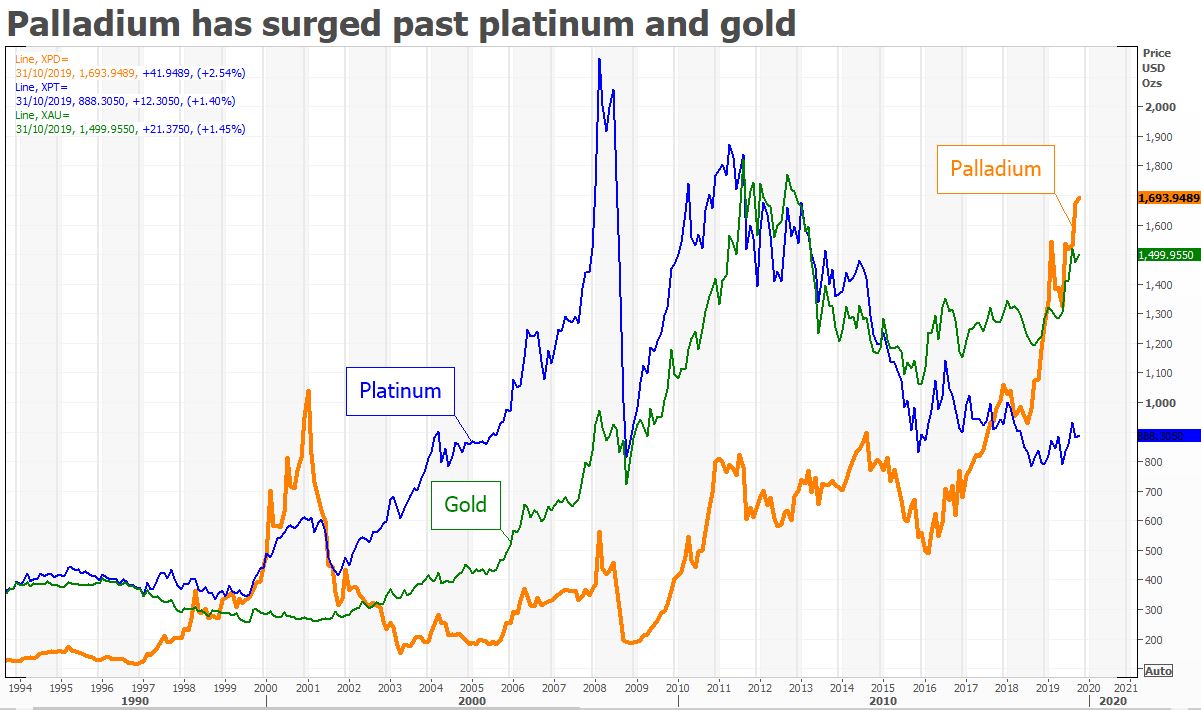 In the precious metals industry, heavy focus is frequently placed on gold and silver as two of the more valuable metals available for purchase. While it’s undeniable that these metals are held in high regard by many industry experts, there are also other, more obscure metals that are rising in demand and value among consumers. Palladium, for example, is a precious metal that has experienced a prodigious ascent through the market within the last several years. If you’re unfamiliar with palladium, it may be worthwhile to learn a little more about it so you can assess how including it in your asset portfolio might be beneficial to your long-term finances.

Palladium is a lustrous silvery-white metal that is most often used in industrial settings, but it can also be found in electronics, jewelry, and some methods of dentistry. In recent years, it has gained popularity among automakers as a means of reducing the amount of harmful pollutants released by vehicle exhaust systems. With stricter environmental regulations being put in place, this precious metal has become a crucial component in the creation of new cars, leading to nearly 80 percent of palladium consumption being accounted for by auto manufacturers.

Why Is Palladium So Valuable?

Even though the demand for palladium has increased significantly due to these new regulatory measures, there has been a shortage in supply. In fact, many precious metals specialists have speculated that the amount of palladium supplied to consumers in 2019 will likely fall short of demand for the eighth year in a row. Because of this, prices have reached record-breaking levels, and the market value is expected by some analysts to continue increasing in the coming months.

What Value Does It Hold for Non-Commercial Consumers?

In addition to reducing your exposure to toxic emissions from your car, palladium could be a valuable addition to your asset portfolio. When diversifying your wealth, the inclusion of a variety of precious metals amid other types of financial holdings may aid in safeguarding your retirement savings against the volatility of the stock market.

Although market prices for metals like palladium are subject to fluctuation, precious metals are often seen as attractive because of their enduring, inherent value, in contrast with paper-based assets that may be less secure in times of economic uncertainty. The purchase of palladium in physical forms like bullion bars may be of significant benefit to the overall stability of your portfolio, thereby improving the stability of the future you’re building for yourself.
If you’re interested in learning more about how to add palladium in addition to other precious metals to your holdings, contact one of our precious metals specialists at Rosland Capital.

Palladium: What Is It, and Why Does It Have Such High Market Value Right Now?

2 thoughts on “Palladium: What Is It, and Why Does It Have Such High Market Value Right Now?”